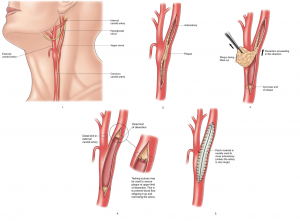 This operation is performed primarily to prevent you having a stroke. Around 25% of strokes are caused by furring up of the main artery which carries blood to the brain. This is the carotid artery, which runs on either side of the windpipe.

There have been numerous attempts to use stenting without showing any particular benefit over surgery.

It is a very effective and safe operation from which the recovery is short. Most people stay in for 24-48 hours and have recovered in 2-3 weeks.